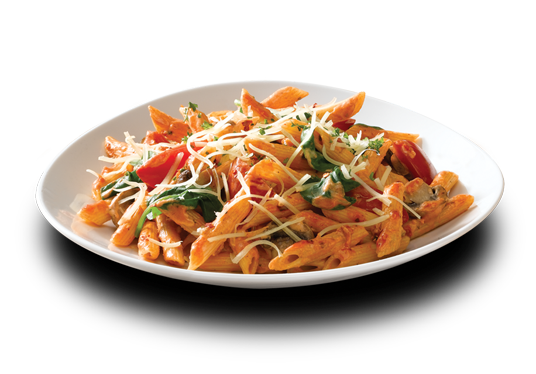 A new restaurant opened in Cupertino recently and after I had heard about it from a co-worker of mine, I was pretty excited to try it. Apparently Noodles & Company is a chain – it just never existed in Seattle so I never knew about it. As described from another co-worker, it was kind of like the equivalent of a Chipotle. That’s not exactly a bad thing, right? I can eat Chipotle. As much as I love my fancy and elaborate dishes, my always go-to comfort food is pasta and it’s a dish that I don’t have an opportunity to eat all of the time. I stopped by after work today and ordered the Penne Rosa –
Spicy tomato cream sauce, penne pasta, mushrooms, tomato, spinach, wine and parmesan or feta. Yum. Just what I wanted after work on a Friday night. The spiciness gave it an extra kick and the spinach, mushrooms, and tomatoes were so flavorful. The guy who took my order said that it was one of his favorite pastas there and recommended that instead of having it with penne to substitute in Udon noodles. It was amaze. I’m glad I’ve found my “new” Panda Express! For those of you who don’t know, Panda Express was being frequented by me nearly every other week and sometimes every week! It was becoming terribly unhealthy. There are some Panda Express Keto Options, so it’s not all bad, but typically I would get the more carb-heavy and unhealthier meals, so I decided it was time to stop!